Home    Film   My Art    Art     Other: (Travel, Rants, Obits)    Links    About    Contact
This review of an exhibit of paintings by Lorraine Peltz at Lyons Wier Gallery in Chicago (Peltz is now represented by Chicago's gescheidle), February 15 through March 16, 2002, was commissioned by the New Art Examiner — which ceased publication shortly thereafter. Thus I make it available here, with more and better reproductions than the Examiner would have offered.

Lorraine Peltz's eight paintings at Lyons Wier continue her exploration of objects traditionally identified as "feminine," but with a deepened interest in the dualities of unity and disunity, knowledge and the unknowable. These concerns are considerably leavened by a humor that manages to be gently self-deprecating without eliding into that flavor of postmodern irony that devalues all imagery. Excellent Hostess presents eight chocolate Hostess cupcakes, each set on a bright pink circle with white doilies underneath: 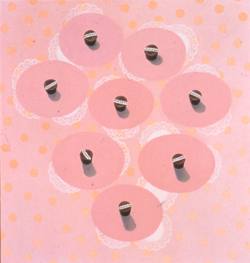 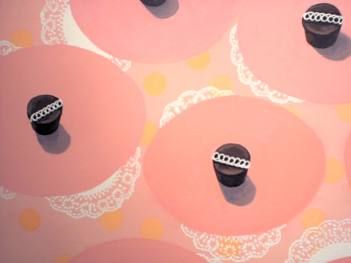 Excellent Hostess, by Lorraine Peltz
The painting serves up the cupcakes in the manner of a store display, with enough excess to make the viewer smile, yet with a painterly conviction that avoids any collapse into pure self-parody. The lushness and inner complexity of her colors (mostly built up in layers), which echo the various hues of human skin, makes one feel that Peltz really likes these cupcakes (and she says she does). While the dark of the chocolate contrasts with the other colors, the orange circles on pink ground that form the background contribute to the fleshy warmth; one feels the areas of paint coming together, almost congealing, into a unity in which each reflects the other — and in fact the chocolate is tinged with a bit of red that Peltz mixed in. The result is a kind of hothouse of sensuality that seems perched just this side of out-of-control. 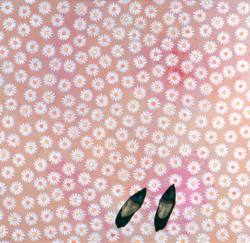 Fantasy Island, by Lorraine Peltz
apparently floating above a vast array of daisies with orange or yellow centers against a pink field. The arrangement of the flowers is an important element here. Sometimes several form neat little arcs or straight lines, while other arrays seem more chaotic, and the mix of perfection and confusion seems part of the point. Similarly, the background is not completely even, but marked with darker splotches of pink or red. Pointing upward, the shoes seem ready to romp through some flower-strewn field, but this particular field is too disordered, and too abstract, to permit a light jaunt. Instead objects are pushed in the directions of symbolic meanings, and associations the viewer might bring; shoes, here as elsewhere in Peltz's work, suggest a womanly self, ready for a flight of fancy amid "feminine" petals.

The Real Me places a pair of high heels, toes pointing somewhat apart, against a peach-tan surface devoid of other objects: 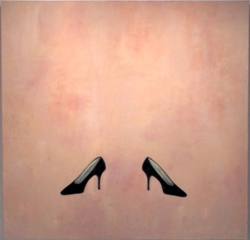 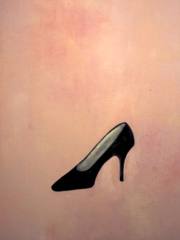 Here the background is even more irregular, varying in brightness and hue in an unpredictably patchy manner throughout. Throughout the exhibit, Peltz often uses techniques that surrender some of her control, permitting drips in Night, 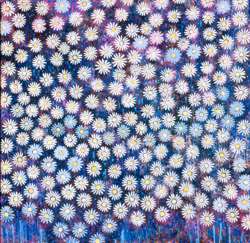 Night, by Lorraine Peltz
for example. Pouring washes directly onto the surface, or flicking paint on with a brush, she produces a painterly version of the order/chaos dualism that informs her subject matter. We can guess what these cupcakes or shoes might mean, but their excess in both numerical profusion and painterly sensuality also suggests things not really spoken, a world of infantile eroticism, of desire become almost unbounded, in which ordinary objects become charged with any one of a number of larger meanings.