This film, which was made between 1976 and 1984, had its first public screening ever on April 9, 2002, at the Robert Beck Memorial Cinema in Manhattan. More information on that specific public screening can be found below. There was a second public screening, at which seven people saw it to the end, at Caro d'Offay Gallery, in conjunction with my one-person art exhibit, on August 1, 2008, and a third, presented by White Light Cinema, on April 16, 2011.

Patrick Friel has written some comments on SN [scroll down], and there is a 2007 interview with me, largely on SN, by the Chicago artist and writer John Neff, in the print and online journal BAT.

Here's the description written for that screening by Beck founder and co-curator Brian Frye:
Finally, the RBMC hosts the world premiere of Fred Camper's rumored, fragmentary, experimental feature film, SN. Made between 1976 and 1984, SN consists entirely of Super-8mm film, the dulcet tones of old Ektachrome reversal resplendent in their silent beauty. The film as extant consists of ten sections, one selected at random from a larger pool of similar possibilities. Most focus on the architecture and urban space of New York City to varying degrees, employing different shooting styles. The perfect film for the perfect critic, SN is slightly, subtly different every time it is viewed. Something like a bittersweet, twelve-tone love-song for the cinema and the greatest city in the world alike, SN should not be missed — not only is it a beautiful film, but it may not be possible to see it again for a good long time. Mr. Camper himself will be on hand to introduce and discuss the film.

The following information was written by me:
I worked on this film between 1976 and 1984. It is super-8, color, silent, 18 fps, and in ten sections. All but one section is on a separate reel, and there are intended to be 40-second breaks between each reel, in darkness and silence, that are a planned part of the film. The eighth section is itself on three separate reels, each of them quite short, and the breaks between these reels should be a little shorter, about 20 seconds. With the breaks, the film runs about 105 minutes.

Many of the sections of this film are edited original (in other words, I have no other copy), so I don't screen it often, nor are any other public screenings planned presently. (One question I will not answer: whether the title means, or stands for, anything.) 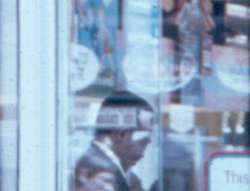 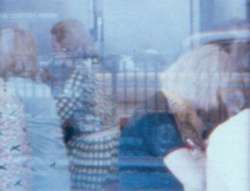 Two frame enlargements of adjacent shots in the fourth section of SN, a film by Fred Camper.

Most of the film was shot in Manhattan, before I moved to Chicago in September of 1976 and on return trips there afterwards. There is no "narrative." The footage is unmanipulated, in the sense that there's no optical printing, no in-camera superimpositions, and most images are in focus. None are "directed," in the sense that when people are visible, I didn't tell them what to do. Each section except the eighth is set in a single location; each reel of the eighth is also set in a single location. Most of the sections are either devoid of humans, or have figures seen in public places. I generally try not to give any clues as to what SN is "about," preferring not to bias viewers in any direction. Only after a screening do I pass out a list of each section and its location. 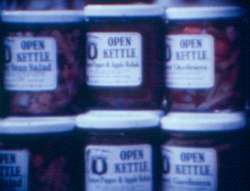 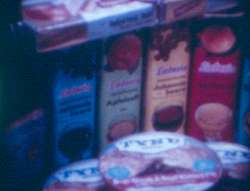 Two frame enlargements from the fifth section of SN, a film by Fred Camper.
The left image is the very first shot of the section.

My original plan was for something much larger than what now exists. I wanted to have 18 sections in all. About a third of them were to have sound, and I did record sound for some of the footage I shot, though no section now included was meant to have sound. But more, each projected reel was to have been selected, through simple chance operations, from a much larger number of edited reels, usually but not always 18. For example, the first section in the film as it now exists consists of people walking through Herald Square. In the original plan, this would have been the second rather than the first section, and the reel that I'm now showing would have been one of 18 reels, any one of which would have had an equal chance of being chosen as the second section on any particular screening; none of these reels would have ever been anything other than the second, though. Two of those other possible reels were to have consisted of the same footage that I'm now showing, but edited very differently. The other fifteen reels would have had different footage, most but not all also of people on city streets. To create these reels, I would have shot footage in five different locations, and then produced three different "edits" of the same footage from each location. So on each screening, there would have been only a one in six chance of seeing the same location as was seen at the previous screening, and only a one in eighteen chance of seeing exactly the same reel. Part of the idea was to have a film that was very different in various ways, but similar in others, on each screening, engaging issues of memory, of geography, of mental labyrinths. It was also partly about the kind of cinephilia that dictates multiple viewings of a film one loves, in which one notices how the same film changes; this was to have been, in a more literal sense than usual, a film to be seen many times.

Completing all of this would have required becoming wealthy, purchasing expensive optical printing equipment, and working on it full time for maybe twenty years. My fantasies of becoming wealthy, together with several other factors, instead led me into ten years of serious depression and the brink of personal ruin, after which, around 1994, I had to abandon this dream, surrender any hope of completing it according to the original plan, and concentrate on making a living, which is what I have been doing. There is enough footage for single "substitution" sections for each that now exists, and for expanding the ten sections to twelve, so a version with a little bit more of the planned chance effect is at least a distant possibility.

One small part of the original aleatory plan survives even in the version that I'm showing. The eighth section, the one on three reels, is always selected by simple chance from among sixteen very short reels in all. Each time it's screened three reels are selected from the sixteen, and their order is also determined by chance. I used to accomplish this via coin flipping; four flips in a row generate a number between 1 and 16. But recently I've been using one of several Web sites that offer truly random numbers; the one I use generates numbers within a specified range using atmospheric noise — a truly random, and nature-based, process.

The original plan also would have involved A&B roll printing of every section, to hide the splices. Instead what I have are reels of edited original and edited workprint. I had long considered that fact a reason never to show the film in public, though I have screened it privately over the years, as a result of which a number of people (about 100) have seen it. It has received what might be called "mixed reviews." I still believe in it, or I wouldn't show it at all, and aside from the visibility of the splices (and the fact that some of the workprinting is not of the best quality, and the colors of the workprint in at least one section have noticeably faded), I do consider it a completed film.

The first and only public screening of this film was held on Tuesday, April 9, 2002, at 9:00 PM, at the Robert Beck Memorial Cinema, at Collective Unconscious, 145 Ludlow Street, New York, NY, and went reasonably well. The Robert Beck shows in a small, informal storefront. Admission was $5.00. There were about 25 people in attendance, a few more than 20 at the end. About one third of them were friends and acquaintances of mine. The fourth section received some applause; questions and comments after the screening were largely sympathetic, though admittedly that's the norm at this type of event. The breaks between reels for thread-up were about two minutes, longer than intended ideally (my preference is to use two projectors), and one break due to an error of mine (providing one reel tails up) was still longer, but otherwise the projection and overall presentation was flawless, thanks to projectionist Brian Frye.

Here's the story of how the Robert Beck screening came to happen:
It is the remarkable spirit and ethos of the Robert Beck, the loose but not careless, open but loving, ambience that it has established over the years, through the unremunerated dedication of Brian Frye and Bradley Eros, that made me think of it as perhaps the one place where I would feel comfortable about showing SN publicly. But I really only began to think of this after Brian Frye asked to see it, and liked it, and later he asked me to show it, but at a different venue than the Beck. It was easy to answer no immediately then, almost out of reflex, but his request did start me thinking about showing it at the Beck. He is, after all, the first "curator" who asked to see it and then asked to show it. And there are several other reasons as well.

The Beck is one of the few places I've ever attended where 8mm actually looks good, due to its uniquely shallow space but screen that's high enough to be visible, and due to the loving care of the filmmaker-projectionists Bradley and Brian. This will be in fact the first time that I've really been able to see the film, because it will be the first time that someone other than myself projects it.

One small problem that Brian's request posed to me is that I never want to permit even the appearance of conflicts of interest involving my work as a writer. Brian is a filmmaker whose films I like a lot, have written on, and hope to write on again. So while his request is what got me thinking, it was important to me that the decision not be made by him. I brought a few sections to New York to show him Bradley Eros some months back, he viewed them, and then said he'd like to show the whole thing.

One last factor in my agreeing to a public showing now is that my faith in my original "model," based in part on the life of Gerard Manley Hopkins, by which I held that it didn't matter if people didn't see or appreciate my work in my lifetime, as long as it survived to be discovered eventually if anyone wanted to, has been totally undermined by "vinegar syndrome." It turns out that what we all thought was durable "safety film," which was not supposed to decompose as fast as nitrate, may be even more unstable, and could easily turn to unprojectable mush in mere decades. The footage for this film is already 20 or 25 years old. If people want to see it, the next few decades may be their only chance.