Ernie Gehr's 1991 Side/ Walk/Shuttle presents a view of San Francisco unlike any I've seen before  on film or on visits. Taking his cue perhaps from the hilly topography, which offers constantly shifting perspectives on the city and the bay, Gehr envisions a place in which the laws of gravity have been suspended. In 25 shots averaging a minute and a half in length, we drift up or down over objects that may themselves be upside down, tilted sideways, or right side up. San Francisco seems a sparsely inhabited wilderness  only occasionally do we see cars or people or a boat in the bay. But if the buildings and 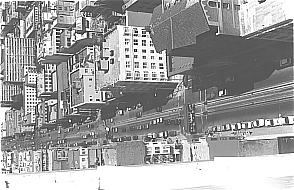 skyscrapers are akin to the bushes and tall trees of a forest, they're also a sort of hanging garden  buildings grow up, but they're also shown suspended against the sky. Gehr made the entire film  which premieres in Chicago with two shorter Gehr films Saturday at Chicago Filmmakers  in an outdoor glass elevator at the Fairmont Hotel that shuttles people to and from a ritzy rooftop restaurant. He couldn't get a permit to film there, so he sneaked in his 16-millimeter hand-held Bolex under his coat. Escorted out several times, he spent almost a year shooting. The film is no fugitive document from some socially marginal outsider, however. Rather Gehr gives us an expansive vision of the relationship between architecture, city streets and the movement on them, the medium of cinema, and patterns of thought. 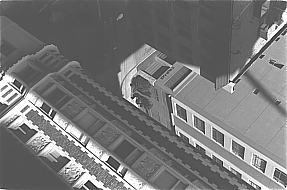 Ernie Gehr, who has lived in Milwaukee, New York, Chicago, and Berlin
and moved to San Francisco in 1988, has completed 24 films since 1968. Each presents a single subject  a highway, a corridor, a table, a street  using a few basic cinematic techniques. In many, rapid cutting or rapid camera movement renders the imagery almost abstract; in three the imagery is completely abstract. All of his films carefully explore the ways in which cinema can make one more aware of one's own perceptual equipment. And a few  of which Side/Walk/Shuttle is one  also seem to offer some social or cultural comment.

Writing of Gehr's city films, film historian Tom Gunning remarks that "few filmmakers have so strongly imaged the city as a circulatory system, a 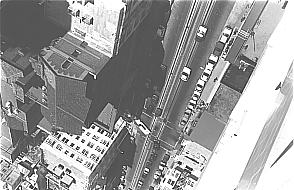 channeling of flows." And in many shots of Side/Walk/Shuttle we do see a few pedestrians, cars, trucks, or cable cars moving. But Gehr always sees not only the streets but the architecture of the buildings that enclose them. The hotel wall that often appears at the edge of the frame places other buildings and streets in the context of the hotel. In some shots, cars parked or moving on the street are fuzzily reflected in smooth parts of the hotel facade. The endlessly repeated vertical movements of the glass elevator are mirrored in the repeated lateral movements of cars and pedestrians  which create similar patterns by stopping at intersections just as we see the elevator stop at the end points of its trip.

The film makes a convincing case for the truth of its grand conceit: that living in a modern city is like being in the cinema  the city creates and limits movements, constructs perspectives, defines views. Cinema was invented only a few years after the skyscraper, in 1895, and Gehr sees both as mechanical constructs related by their rectilinearity. The glass elevator is itself akin to the many contraptions that have been constructed over the years to move the camera, recalling helicopter shots, the numerous cranes used in melodrama and action films, and the famous rising high-angle shots in Griffith's Intolerance. Gehr's method also recalls some of the first movements of the camera in cinema  short films from a boat on the Seine showing Paris moving past, or an aerial view of Paris from the elevator that ascends the Eiffel Tower. Here Gehr gives us the city  the elevator, the people and cars on the streets  as a creator of "moving pictures."

The many images in which the side of the Fairmont is visible as a dark strip at the edge suggest the borders of the frame itself. And an ornate building facade, centered in the frame, often resembles a carefully crafted film image. Moreover, the architecture of a city produces different perspectives. Two adjacent buildings create a view through the slit between them; buildings are always casting shadows, blocking out or at least darkening part of the frame. Midway through the film we see the front of an ornate building almost obscured at one edge by a dark vertical shadow; all such limits recall the frame borders. Gehr also sees parallels between movements in the city and the properties of the film strip itself. At the beginning and end of the elevator trip we see a little fake balcony with fussy archways. Gehr connects these arbitrary pomo architectural gewgaws to the arbitrariness of the 100-foot rolls of film he shot, and of all decisions about where to stop a film image. Some of his end with a red orange flare out, which often appears when a roll is finished, that consumes the balconies in cinema's nearest equivalent to the sun. And just as Gehr turns his camera upside down to emphasize the artificiality of gravity-defying skyscrapers, so a few shots are also spliced in backward, reversing the motion of cars and people in the street; in one such image a boat can be seen backing into its own wake. These are not cute tricks but explicit references to the shape of the film strip: he sees cinematic conventions of photography and projection as parallel to the endlessly repeating, and reversing, movements of glass elevators.

Some of Gehr's points could be made about any modern city. Structures enclose or delimit each other, the land, and the sky; as one moves about a city in a car or bus or cable car one is trapped inside a metaphorical movie projector, a participant in a giant image-making machine. Gehr's sound track emphasizes the generality of his comments on the city. Though the first shot is accompanied by a recording of sounds in the elevator, the sound track for the later shots suggests a variety of sources, and in fact was recorded in New York, Venice, Geneva, London, and Berlin.

But one aspect of Side/Walk/Shuttle seems uniquely suited to San Francisco, with its shifting views and geological faults. In each shot Gehr subtly and masterfully tilts the camera as the elevator moves in a complex ballet that constantly alters our view of the moving forms outside it. An image that begins as an upside-down shot of some water tanks and other rooftop structures soon becomes an upside-down shot of the water tanks passing by, almost staring at us like animals seen from a train window. After many high shots from the elevator in which the land looks almost flat, one dramatic tilt up near the end of an ascent gives us our first full view of the downtown skyscrapers, looking like a group of behemoths rising from the deep. Many of Gehr's tilts are almost invisible, however, designed to minimize the impression of movement. In one shot of a tan apartment tower set against blue sky it appears that we're no longer in motion  until the blue sky becomes a moving cityscape. Gehr has been tilting his camera to keep the tower's top in the same position in the frame as the elevator moves. Another shot of the same tower does the same, almost as if Gehr wanted to give this particular building stability in an unstable world. But the effect is the opposite; the tower may remain still within the film frame, but it seems precariously hovering against the continually moving background. All perspectives, all images are seen as momentary, arbitrary intersections of place and time.

There are no absolutes here; Gehr offers us a peculiarly modernist view of the nature of urban, and cinematic, reality. No image is permanent, nothing conveys any transcendent truth; the world and our perceptions of it are both constantly shifting. However profoundly general this conclusion may be, it is also not inappropriate to a city living in justifiable fear of "the big one"  the one that will bring down its buildings and bridges. The vertiginous spaces of Side/Walk/Shuttle are echoed in the unnerving experience of feeling the ground shift in even a minute quake.

These shifting images also have parallels in mental processes. Buildings and backgrounds change in relation to each other the way that new knowledge inflects old ideas; dizzying oblique perspectives suggest insoluble mental puzzles, unnameable psychic traps. The reverse-motion shots evoke memory, with its little jumps backward in time. The spatial disorientation created by these shifting perspectives almost removes the buildings from the realm of the physical; they become like mental images, ideas that pass in and out of view and, under scrutiny, are sometimes transformed.